FOI Summit: Freeman Honored with Heroes of the 50 States Award 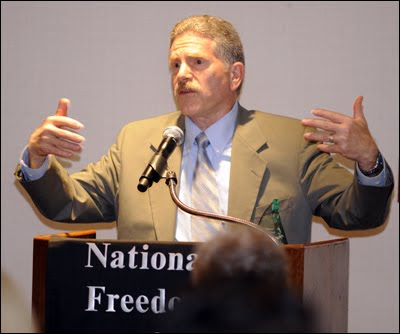 Robert J. Freeman was honored by the National Freedom of Information Coalition and the Society of Professional Journalists with the Heroes of the 50 States: The Open Government Hall of Fame Award for 2010. (Photo by Michael T. Martinez)
Robert Freeman received the highest and most meaningful award for state and local freedom of information work to honor his work with the Committee on Open Government in New York. Freeman said his greatest achievement has been that the state's Freedom of Information Law (FOIL) has become part of the culture, noting that New Yorkers use "FOIL" as a noun and verb without knowing what it stands for, but knowing that FOIL allows them to get public information.
Posted by National Freedom of Information Coalition at 2:05 PM