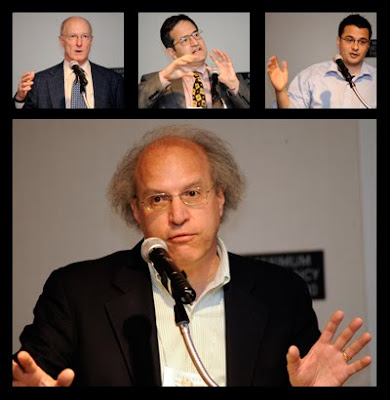 Thomas Sussman, director of the Governmental Affairs Office of the American Bar Association (clockwise from top left), J.H. Snider, president of iSolon.org, John Wonderlich, policy director of The Sunlight Foundation, and David Donald, data editor for The Center for Public Integrity, spoke on access to information in the digital age. (Photo by Michael T. Martinez)
Attendees heard from experts breathlessly working to transform access to governmental information. Here are notes from the FOI Summit session "Transparency in the Digital Age: The report card, thus far":
Posted by National Freedom of Information Coalition at 2:42 PM