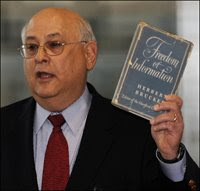 Congratulations to Mitchell W. Pearlman, who was selected by the National Freedom of Information Coalition and the Society of Professional Journalists for their joint "Heroes of the 50 States: The Open Government Hall of Fame" award for 2009.

Pearlman is a lecturer in journalism at the University of Connecticut and long-time director of that state's FOI body. He served as the executive director of and general counsel for the Connecticut Freedom of Information Commission from 1975-2005, and he currently serves on the Board of Directors of both NFOIC and the Connecticut Foundation for Open Government. He was designated as FOIC's Executive Director Emertius in 2005.

The State Open Government Hall of Fame is open to anyone who has made a substantial, sustained and lasting contribution to open government or freedom of information within one particular state. Nominees may come from government, the media, the non-profit sector, the legal profesion or any other area of endeavor that involves citizen access to government records, meetings and procedures.
Posted by National Freedom of Information Coalition at 4:25 PM