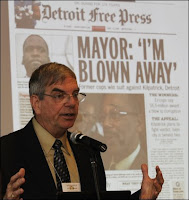 Paul Anger, editor and publisher of the Detroit Free Press spoke of the controversy surrounding former Detroit mayor Kwame Kilpatrick and how the newspaper used FOI to tell the story. The Detroit Free Press won the Pulitzer Prize in the local reporting category for its coverage of the scandal. Here are the notes from his session at the NFOIC Summit:

Background on the issue:
Lessons from the Detroit Free Press coverage:
Epilogue:

Posted by National Freedom of Information Coalition at 10:07 PM