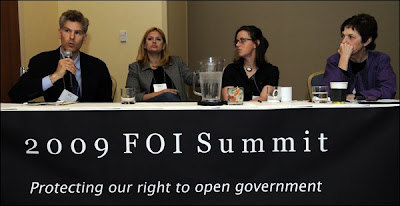 James Shiffer, reporter and editor at the Minneapolis Star Tribune; Tisha Thompson, investigative reporter at WTTG Fox 5 in Washington, D.C.; and Jaimi Dowdell, IRE training director and former computer-assisted reporting editor at St. Louis Post-Dispatch, discussed how to use FOI to inform the public about infrastructure issues. Patrice McDermott, director of OpenTheGovernment.org, moderated. Here are some notes from their session at the 2009 NFOIC Summit:

Lessons from the Minneapolis I-35W Bridge collapse:
Lessons from bridges and dams coverage:

Posted by National Freedom of Information Coalition at 11:23 AM