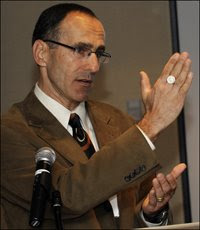 Richard J. H. Varn, director of the Coalition for Sensible Public Records Access and the chief information officer for the City of San Antonio, spoke on the threats to and values of public access. Here's part one of notes on his 2009 NFOIC Summit session:

Posted by National Freedom of Information Coalition at 7:45 PM